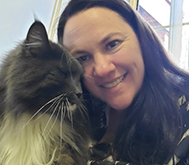 Hi Jessica,Attached are some pics of Darcy settling into his new home – including his new spot in my home office ??He’s settled in a lot better than I thought he would. He’s eating and interacting with us like we’ve never been apart. He’s playing with the kids and giving me heaps of snuggles. We are really lucky to have him in our lives. I can’t thank you enough for getting him home for us. There’s no way I could have navigated the complexities of the Australian animal import requirements so we are so grateful to have you!!Thanks again for everything. Jaki
Read More...

Hi Martiza, We wanted to thank you for coordinating Leo and Panda's move to Poland.Although a little stressful during the final hours, we truly appreciated your real-time communication and professionalism.Attached are photos of Leo and Panda enjoying their new space.Thank you,Jeff Alexander
Read More...

Hi Maritza,I just wanted to reach out and thank you from the bottom of my heart for helping out with the Health Certificate for Ozzi and for making all of this happen.It is so appreciated to have someone like you handling these types of things during a very trying time for me. AirAnimal is lucky to have you.Please let me know what the next steps are.Bronwyn and OzziNote from Ozzi:Thanks so much for helping me to travel with my mom
Read More...

Riker has three loving pet parents in his corner helping him relocate to the UK.From Tracey in the UK: Thank you so much Cory you made the whole process from my point of view easy.I did call the UK agent for a update and he was just about to call me to say he was almost ready to be picked up!The animal reception centre very efficient even with the COVID-19 process.+++++From Susan Kane in USA: Tracey said that the people at the Animal Reception Centre were lovely - he was out in less than 4 hours after at least one other dog and two cats from New York who were in the queue ahead of him.  The only issue was that they fed Riker ALL the food that Debbie had packed for him - several days worth!   Debbie said that the man at BA in Boston was very efficient. Debbie was naturally a bit fussy and worried about all the details and he told her not to worry since he had shipped over 1000 dogs in the time he had been on the job.  She can fill in the details for you once she wakes up.  We were up all night tracking the flight.Riker made it safely to the UK.  Again, thank you for your assistance.  It worked out well even during the summer and a pandemic!  Susan++++++++Hi, I think you have all the news from Susan, but I wanted to add my thanks. All went well in Boston.  We got there about 3:45 and was able to keep Riker outside with us for an hour while they checked him in and taped everything to his crate. I think he was the only dog on that flight. He was kept in an office with the cargo employee until 7:00 when he was taken to the plane. The only question BA had was if the fee for his ticket had been paid. I told them to call you for verification. Thanks again for your help and for tolerating questions from all of us. We couldn’t have done this move without your services. Best,Debbie
Read More...

Hi Maritza! Astrid has arrived safe and sound to Stockholm and is now on her way together with Terese to Gothenburg! She was very happy when she arrived but fell asleep as soon as Terese started driving, she is probably exhausted from her trip!Thank you for everything, it feels so good to finally be back on Sweden! Kind regards, Martin & Terese
Read More...

Pax and Surya relocated to Singapore from New York last week and were reunited with their pet parents after the required Singapore 10-day quarantine.Dear Air Animal,That’s a huge relief and a big part of our transition complete. Thanks a lot to your team too for all the care and the attention!! Anthony & Cristina, thanks for the help in New York to get the dogs started on their journey in comfort and style!And Cory, what can I say! What an adventure it’s been. We can all now relax. Your patience and persistence and positive energy has been the mainstay of this move and made it possible. Thank you for everything!! Now it only remains for me to complete my quarantine and meet up with Kartik and the dogs ??As a way of saying thanks that Pax and Surya are with us and that they are lucky to have so much care and attention from so many people along the way, Kartik and I donated to a dog charity in Singapore. So we can pass on some of that love. With warm wishesKavita and Kartik Pax and Surya
Read More...

Hi Maritza Sorry for the delay. All went super well with a Presley’s transfer and she is settling in nicely. We had to take her to the vet a few days ago as part of the registration requirement and she is doing great. Thanks to you and the team for all the great work on getting her here safely. You guys made it easy. Attached are a few pics of her recovering and enjoying life in Switzerland. Regards, Jeremy Gowler
Read More...

Beijing to Guangzhou to Singapore

XiaoXiao, a male Turkish Angora,flew from Beijng to Guangzhou, China to Singapore during the pandemic. Here he is finally home after the trip and 30 days of quarantine in Singapore.  "Many thanks for bringing Xiaoxiao over and for this information. And thank you to everyone for their efforts for making this happen. We are incredibly grateful and are still in disbelief that he is actually here!Here are a few pictures and a short video - it was soon after he arrived so he is still a bit wide-eyed and anxious but you might be able to make out the purring!Thank you again!Roohi
Read More...
Previous Page
Next Page
Newsletter Sign-Up! Click here to register!