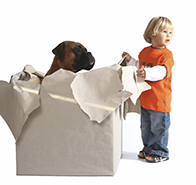 U.S. passenger airlines that transport pets overseas limit pet transportation in the Northern Hemisphere May through mid-September. Airlines based in other countries may also follow these policies. Generally, pets may travel air cargo only when the air temperature is between 45 and 85 degrees Fahrenheit (7 to 27 degrees Celsius) at origin, all transit points and destination.
Air Animal offers this backgrounder for more information about moving your precious mushy-faced dog or cat.
Read More...

Moving Pet to the UK? Read this!

Moving your pet to the UK requires four to six weeks pre-planning at this time.

There are options to flying into Heathrow. Options add travel time, planning time and may increase cost.
To get started, tell us more about your pet move. A pet mover will be assigned on our next business day. Your pet move manager will email you with their contact and more information about next steps. All of our UK move specialists know the challenges surrounding a UK pet move and they are creative about moving your pet safely to your new home.
Read More...

This includes dogs that have visited a high-risk country any time in past six months -- even if the dog is arriving from a country not on the list.

Dog import permits from high-risk countries will be extremely limited and granted case-by-case.

Only specific pet owner types may apply for an import permit.

If you leave the U.S. with your dog, your pet may not be approved for re-entry. Travel is not a valid reason to request an import permit.

Permits will not be given at arrival. Dogs without a permit will be denied entry and returned to the country of departure at the owner’s expense.

There is no appeal for denied applications. Application does not guarantee approval.

At this time, all dogs granted import permits must enter the United States through the live animal care facility at John F. Kennedy International Airport in New York City.

Click these links for further requirements and more information.

The CDC will periodically review the suspension.

Many airlines around the world do not accept brachycephalic breeds for pet travel or pet shipping. The bans include bulldogs, pugs, Pekingese, Boston terriers, French bulldogs and other “mushy-faced” breeds. This applies to mushy-faced cats, too.

“Why? They are adorable. But their narrowed and pinched nostrils, shortened airways and narrowed windpipes cause life-threatening breathing difficulties during transport,” said Air Animal Pet Movers founder and veterinarian, Walter M. Woolf, VMD.

“Dogs only have sweat glands on the tips of their noses and the pads of their feet. “Mushy faced” dogs are only able to cool their bodies by moving large volumes of air across their narrowed throats and extended tongues,” Woolf explained. “Extended and engorged tongues are dog radiators expelling body heat. On the other hand, cats don’t pant—at all.”

Some U.S. and international airlines accept brachycephalic breeds for transport but ONLY when the air temperature is than 80 degrees Fahrenheit (27 degrees Celsius) at origin, all transit points and destination. For up-to-date information about heat embargoes, please review the blog post.

“Ground transport is a safe alternative for all pets restricted by the airlines,” added Woolf. “Air Animal offers a network of trusted ground transport service partners throughout the USA. We also suggest pet parents of brachycephalic breeds check the airline websites for information.”

Giving a Pet for the Holidays? Amp Up Anticipation Instead

If a new puppy or kitten has made it onto your gift list, give a gift that amps up anticipation and participation instead of bringing the cute little fur baby home during the holidays, advises Air Animal Pet Movers.

Cory Robinette, Air Animal’s COO, recommends fulfilling holiday pet wishes this way. “Buy a beautiful plush puppy or kitten toy and give it with a card promising to contact a local breeder after the holidays when you can choose that real puppy or kitten together. Local animal shelters and breed rescue groups may also have that perfect pet just waiting for you. You may also find some post-holiday sales on dishes, leashes, beds, scratching posts and toys for your new fur baby,” Robinette adds.

“Puppies and kittens are babies. They need to bond with their pet parents, potty-train and learn the house rules. That means lots of play time and repeating the routines over and over. Keeping fur babies out of the holiday decorations and making sure they don’t eat something dangerous like chocolate or poinsettias is a full-time occupation. Bringing a fur baby home when celebrations slow down after the New Year can work a lot better,” says Walter M. Woolf, veterinarian founder and CEO of Air Animal Pet Movers.

There are thousands of Internet ads selling cute puppies and kittens or offering rescued pets during the holidays. Sadly, these ads often set-up cybercrime. “The Internet is full of imitators and fraudsters offering fake rescued pets, Siberian husky puppies, Yorkies, bulldogs, Capuchin monkeys, parrots and other boutique animals. Don’t be fooled by pet scams!” warns Robinette. “We get calls all the time from people who have been scammed. They think we are transporting their pet purchase from the fake breeder. It breaks our hearts.”

Acquiring that new member of your family through an internet purchase may look good. Caveat emptor---buyer beware.

There are ways pet lovers can effectively fight back if they have been scammed. Check out Air Animal’s Don’t Be Fooled page. It’s regularly updated when new pet scams pop up.

Best bets to get a pet after the holidays:

Six months after COVID-19 closed much of the world, pets are moving internationally. Many clients are anxious, stressed and concerned about moving their pets during a global pandemic, according to Walter M. Woolf, veterinarian founder of Air Animal Pet Movers.

“In June 2005 Air Animal received 7,500 calls because the USA implemented the Safe Animal Transportation Act. Then one of the major airlines stopped taking pets. I had been the chairperson of the advisory task force to the Congressional joint resolutions committee responsible for reconciling the House and Senate versions before the act passed. The law was and continues to be the cornerstone keeping pets safe during air transport. Over time the number of pets relocating internationally with their owners skyrocketed. The state of international pet moving in September 2020 is all about capacity. It’s about air cargo space on passenger and special freight flights. And it’s about staffing at animal receiving centers throughout the world,” Woolf said.

The United Kingdom’s main pet import center at Heathrow airport has limited the number of pets that can arrive each day because COVID-19 is challenging their staffing. When a staff member becomes ill, contact tracing means several colleagues must quarantine as well. Because pet air cargo flights can only be scheduled two weeks ahead, the incoming slots at Heathrow are often already full. The situation requires a lot of back and forth for pet move managers, receiving center staff and relocating pet owners. This story is repeated at pet import centers around the world.

“We understand that cancelled flights, cancelled pet bookings, rescheduling travel and continually changing agendas are very frustrating. We always work with relocating pet parents to make sure their pets reach their new homes safely even though neither they nor Air Animal’s dedicated pet move managers control pandemic lock-downs, weather or airline schedules.

“We appreciate our clients’ understanding, their patience and their trust. Air Animal cares deeply about the pets our clients entrust to our care. Pet Moving Made Easy®. It’s our focus, our passion, our promise and our clients’ peace of mind. Always has been – always will be,” she added.

In late July, the first dog to test positive for a COVID-19 infection in the United State died. The veterinarians who reviewed the dog’s records say the likely cause of death was a cancer called lymphoma which was not diagnosed until after the dog died.

Dr. John Howe, president of the American Veterinary Medical Association, appeared on WNBC-TV (New York City) and said, “It’s extremely unlikely that a pet is going to get COVID-19.”

Pets are highly unlikely to transmit the virus to people even if it gets on their skin or fur, according to the Mayo Clinic. Mayo and the AVMA advise against using disinfectants, alcohol or hydrogen peroxide on pets. They also advise there is no reason to cover pets’ faces.

People with COVID-19 may spread the virus to animals. The U.S. Centers for Disease Control recommends that pet owners who are sick limit their interactions with their pets.

Getting from Tampa to St. Petersburg, FL before 1914 took five-hours by train, or a slow steamboat across the bay.

Enter Tony Jannus, a famous pilot and barnstormer known for his adventurous stunts. In 1912 he set a new record for an overwater flight between the two cities. This caught the attention of businessmen Percival Fansler, invested in Jannus’ “flying boats” creating a commercial route.

The first ticket was bought at auction for $400. The first flight took place Jan. 1, 1914 in front of 3,000 aviation fans. The Benoist plane took 23 minutes to reach Tampa from St. Petersburg, FL on a 75 horsepower engine traveling about 60 miles per hour. A propeller blade monument in the park near the corner of Bayshore Blvd. and Platt St. commemorates the landing.

Fansler addressed the crowd when the airboat arrived. “What was impossible yesterday is an accomplishment today, while tomorrow heralds the unbelievable.”

The Airboat Line’s commercial fares were $5 one way. Jannus made two flights a day. The airline booked charters to Egmont Key, Pass-a-Grille, Clearwater and other nearby waterfront locations.

In the twenties, Florida was booming. Eddie Rickenbacker established Florida Airways in 1926. The airline had four planes that could carry eight passengers and two crewmembers. According to the Florida Center for Instructional Technology, fares were based on railroad fares plus $5 for each hour saved. It cost $30 to ride the train from Jacksonville to Tampa and $70 by plane because the plane saved 8 hours. Florida Airways served Miami, Ft. Myers, Tampa, Jacksonville, Atlanta, and Macon. No pets—yet.

Photo: Janus is pictured at the helm of one of the Benoist planes. (Photo from the State Archives of Florida).